Baitcaster reels employ a revolving spool for line storage and a crank handle which is geared to rotate the spool three to five time for each turn of the handle.  The design also includes worm gear level wind control device which evenly distributes the line on the spool, star drag setting wheel, spool cap for added spool control, and a thumb operated spool relay button which allows the spool to rotate freely. 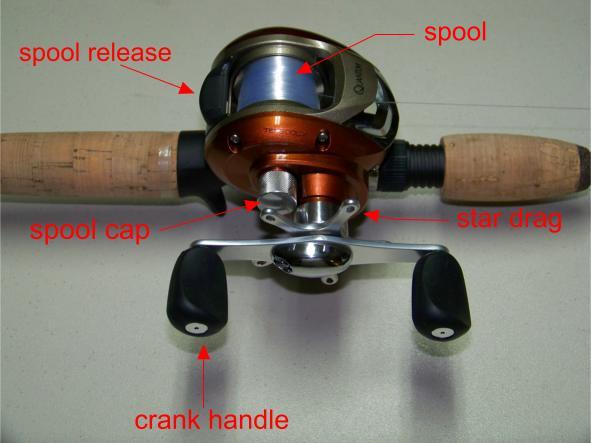 Baitcaster reels do require some practice by most because of the likelihood of backlash.  Backlash, sometimes called “bird’s nest”, occurs because the reel’s spool is spinning faster that the line is coming off the spool.  This tangling of the line on the spool in most cases can be undone in a matter of a few minutes but on rare occasions may be so severe that the only option is to cut some of the line off the spool. 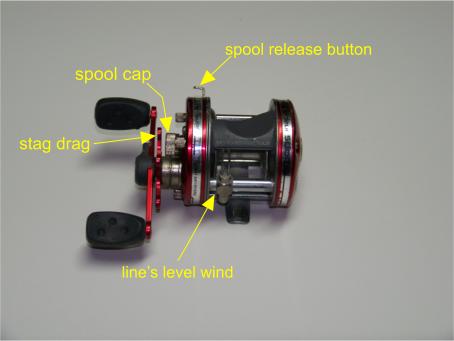 Still, the chief governing factor in preventing backlash and maintaining absolute control on all baitcaster reels is the operator’s thumb.  The thumb is used to push the spool release button, then drops onto the spooled line holding it in place until the cast is made.  As the spool is spinning and releasing line, thumb pressure on the spool prevents backlash and enables the angler to have complete control of the bait’s intended landing point.  It can not be over emphasized the importance of “thumb control” when using baitcaster reels!

Several of the standard baitcasting reels used in freshwater fishing have been designed with an additionally anti-backlash feature.  Most of these designs utilize magnets to slow the spool speed during the cast, making the lack of “thumb control” a little more forgiving.  However, thumb pressure on the spool is still essential.

So, what is the best way to learn how to use a Rod and Reel Combo

?  Simple, go fishing and try these straightforward tips.  First, when learning to cast, start with a heavy weighted lure or bait of 3/8 oz or more.  Next, adjust the spool cap as described above so the spool stops turning when the lure touches the ground.  If the reel has anti-backlash feature, a middle setting should be selected.  When casting (remember to use your thumb), do not try and cast long distances, start with smooth short cast and work your way up.  Finally, if the spool has even the smallest of a line tangle, pull the tangle out before retrieving the line to make the next cast.  Before you know it you will be casting like a Pro!

Another advantage of baitcaster reels is the efficiency of the drag mechanic.  The drag dependability of the conventional saltwater baitcasters is one of the big reason these reels are so popular among angler who enjoy trolling.  The drag on all reels is a function of resistance.  Resistance to how much strain is necessary to pull line free off the spool.  This prevents the line from breaking while causing the fish to exhaust itself.  Baitcasters with its star drag setting wheel and multi washer mechanic permits easy, exact adjustments able to withstand long hard runs.  The drag should always be adjusted when the reel is spooled with new line.  Additionally, the drag has the tendency to become sticky when the reel has been stored thus, the drag should be checked every time “before” the first cast.  In the real world of fishing, setting or checking the drag for most anglers means grabbing the line just forward of the reel and giving it a good strong pull.  Experienced anglers develop a “feel” for the drag setting they prefer.  For the less seasoned however, Fishing-Tips-Bait-Tackle.Com recommends keeping the drag a little lighter until that “feel” is acquired.

When purchasing a baitcasting reel; generally, your best value is to purchase a rod and reel combo.  Most often these combos have a good reel to rod match and come in a wide variety.  A quality baitcaster spooled with 12 to 14 pound test line used in freshwater to catch bass or catfish will work equally well in brackish and saltwater estuaries to catch redfish or sheepshead.  Baitcasters are very versatile and as with any reel follow the manufacturer recommendation for care of the product.

From Baitcaster Reels go to the Home page
"Contact Us"