The Black Drum is one common resident of southern estuaries.  A hardy fish which can tolerate a wide range of water conditions from clear to muddy, fresh to salty, hot to cold, and shallow to deep.  This adaptability coupled with a long life span allows these Drum to grow large.  Thirty and forty pound Drum are common in many areas around the south. 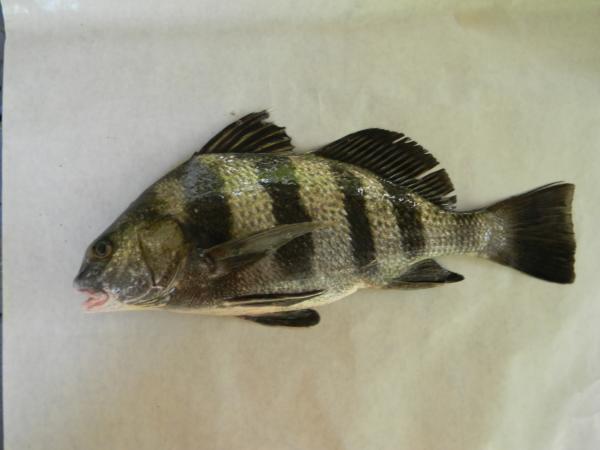 The Black Drum has several aliases which include Striped Drum, Sea Drum, Drumfish, and Drum.  The ability of these fish to generate a distinctive drumming noise accounts for the name Drum.  Produced with the use of their air bladder, the drumming is detectable by anglers as schooling Drum pass.

Besides the four or five dark vertical stripes (which fade with age), the most notable characteristic of the Drum is the barbels or feelers on the underside of the lower jaw.  These feelers are essential to the Drum’s feeding behavior because being bottom dwellers, their food is most often found by feel and smell.  This means to catch Drum, get the bait on the bottom.

Drum are likely to be caught by anyone when bottom fishing, whether fishing off the bank, from a pier, or out of a boat.  Unless specifically fishing for Drum over thirty pounds, no special tackle is needed.  A standard medium rod and reel loaded with 17 to 20 pound test line will land most Drum.  The use of a bottom fishing rig which has a stronger pound test leader is advisable and multi-hook rigs works well.  Crabs, cut bait, or squid will catch Drum but for many anglers dead smelly shrimp often produces fish. 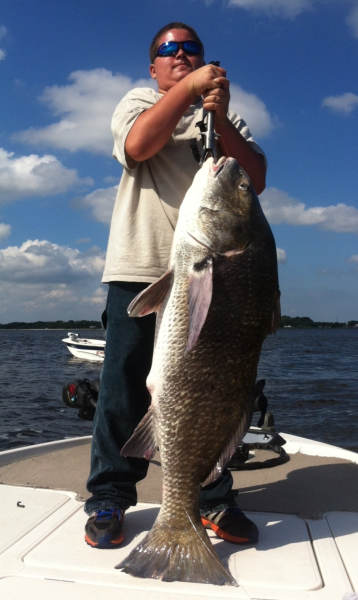 For anglers wanting to make a meal from their catch, the most desirable size to keep is generally under six pounds.  Larger Drum have somewhat coarse flesh making it somewhat chewy similar to that of large Red Fish.  However, large Black Drum are often specially targeted starting in February and running through March when they move into deep inland saltwater channels and bays to spawn.  Often referred to as “Bull” Drum and weighing over thirty pounds, they are strong fighters which generally requires heavier tackle plus a boat is often needed to reach them.  Once on the fishing spot, boats are anchored and a blue crab is sent to the bottom as bait.  Blue crabs are a major food source for the Drum.  This annual “run” of Bull Drum (both male and female) has become so popular in some areas that local newspapers announce their arrival.  Also, for many anglers this is a rare chance to catch a fish over thirty pounds and after a quick picture with their catch, most will release the Drum to return to the spawning population.


From Black Drum go to the Home page
"Contact Us"