Croakers are a brackish to salt water species ranging from central Florida up the Atlantic coast to around New Jersey and along the northern section of the Gulf of Mexico.  Identified most often as the Atlantic Croaker, they have a silvery to gold hue with indistinct lines like stripes on part of their body.  From these characteristics along with the actual croaking sound they make when landed, they are easily recognized.

Averaging a pound or less, the Atlantic Croaker can be caught in the surf, around river outlets near the beach, and sandy hard bottom bays.  In late spring, throughout the summer, and into early fall, these fish move into the estuaries to feed on shell covered bottoms.  Generally, they feed in schools , so if one or two are quickly caught, odds are there are plenty more to be had.  This makes them a good choice when introducing a kid to fishing.  Plus, most states have no size restrictions and have generous harvest limits if any at all.  As always, however, check your local fishing guidelines to be sure.

, configured with a bottom fishing rig with a 1/0 hook and weighted with just enough sinker to keep the bait on the bottom (generally no more than about 2 ounces).  As for bait, fresh shrimp works best but frozen shrimp most days will produce fish.  Sand fleas, cut bait such as mullet or squid and even fiddler crabs can be used.  Like Whiting, these fish can be caught in the surf along the beach or outlets.  When handling them use a towel or glove because they have sharp edges around their gills which can cut.

These fish are easy to clean (larger ones should be filleted

Here is a tip for you.  Do not be to quick to throw a small Croaker back, instead fillet a piece of flesh off the fish and use it as cut bait.  This may entice other fish like Sand Trout, Redfish or Black Drum to bite.  And if cast netting for bait, save the smaller live Croakers to use.  These small live Croakers can be lip hooked or hooked through the eyes and fished on the bottom.  Redfish have an appetite for small Croakers. 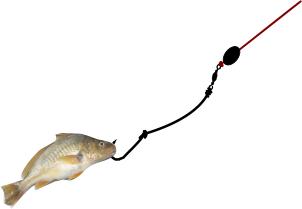 From Croakers go to the Home page
"Contact Us"