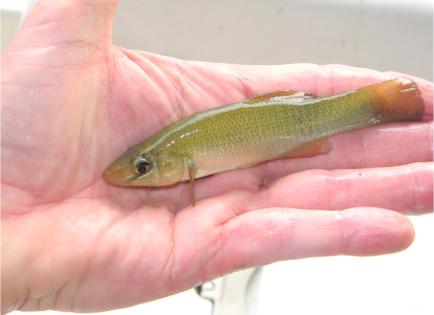 These minnows are however, different from finger mullet in several key ways.  First, mud minnows are not migrate, they stay in local waters year round making them available as bait at anytime.  As water temperatures drop, they become the most accessible bait on hand.  This fact alone makes mud minnows a prime enticement for hungry fish in the colder months.

Secondly, these minnows can be caught using a baited minnow trap.  This is very handy if there is time to set the traps and let them do their job.  Bait a couple of minnow traps with bacon, locate a spot where the minnows are hanging out and place the trap there.  Remember that mud minnows like shallower water so don’t place the trap in deep water.  The traps may also be baited with hot dogs, shrimp, or a piece of fish. 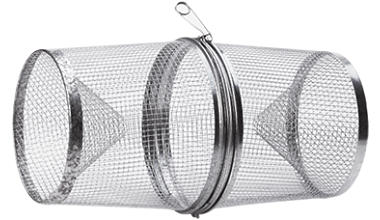 Mud minnows are more robust then finger mullet.  This is one more difference between the two species.  The minnows can survive easily in a Flambeau Premium Bait Bucket Lid / Portable Aerator One Combo or 10-Quart Minnow Bucket with only an occasional refreshing of the water.  In fact many fisherman who have forgotten to empty their live wells, often find the next day that the only surviving occupants are the mud minnows.  In addition, because they are such survivors, selling of these minnows by bait and tackle stores become feasible.

The mud minnow can be fished using any of the standard methods.  Most often a 2/0 circle hook is adequate, but more importantly choose a hook size that will allow the minnow to be hooked through the lips or eyes and remain alive.  Expect to catch redfish, flounder, spotted trout, or even large mouth bass.

In the spring as flounder prepare for their migration into local inlets, they will hold up on near shore reefs.  Mud minnows are particularly effective when used to catch these schooled bottom feeding flounders and in this case, the flounders don’t care if the minnows are alive, dead, or even frozen. 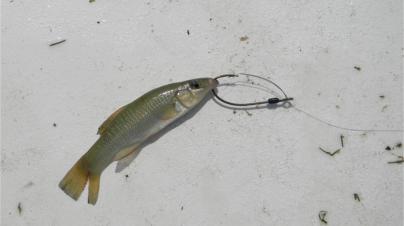 In shore one of the more popular ways to fish the mud minnow is to tie a 3/0 weedless hook onto a rod and reel designed for baitcasting, lip hook the minnow then smoothly cast him into clean open (pothole like) spots around water lilies or ell grass.  For the adventurous, this is particularly fun when wade fishing.

From Mud Minnows go to the Home page
"Contact Us"