Mullet fishing has quietly become a fascination for many.  There are two main reasons for mullet fishing’s growing popularity.  The first deals with the abundant number of mullet that inhabit the water ways.  Mostly black mullet swarm into estuaries up and down the Atlantic seaboard during the hot summer months, where these immigrating mullet grow and fatten.  Foraging primarily for algae, mullet have a habit of mouthing small tidbits floating around in the water.  This means the mullet will take a baited hook if appropriately enticed.  This leads to the second reason mullet fishing is gaining popularity, the style of fishing used to catch them.

Mullet have always been a target for cast netters.  Cast nets

are still very effective when used to catch mullet but most of the mullet caught in cast nets today are finger mullet and used as bait.  Catching mullet on a hook however, can be a lot of fun as well as productive.  Since mullet do not bite in the conventional matter, mullet anglers have perfected techniques and rigs suited for these frantic fighters.

The technique generally involves fishing from road side areas that allow access to shallow waters where mullet loiter.  The mullet are concentrated together and sent into a feeding frenzy by chumming with laying mash (chicken feed).  Laying mash is used because it dissolves quickly leaving the mullet eagerly seeking something to nibble.

Most mullet fishing rigs are #2 or #3 hooks tied 8 to 10 inches apart along a fishing line with a float about 4 inches above the first hook and a sinker (or sinkers) attached near the bottom hook.  One such rig was made with a swivel at the top, sinker at the bottom and dropper loop knots used to attach the hooks.  The proprietor of this particular rig says he baits the hooks with small bits of white plastic worm or real earthworms, but his favorite bait was a bit of fat back bacon.  And since mullet are more nibblers than eaters the float must be watched closely because when the float begins to move even the slightest the hook must be set. 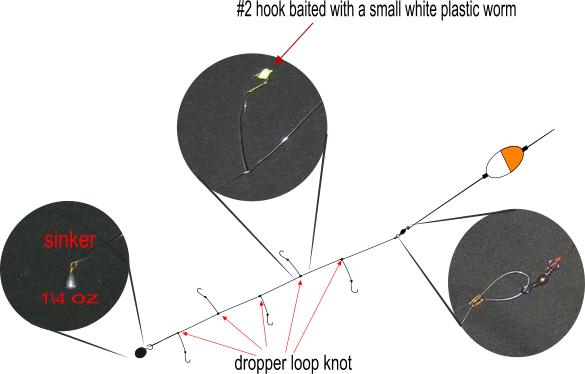 Judy, from Madison County, Florida, told Fishing-Tips-Bait-Tackle.Com that she fishes the “wall” near Green Cove Springs on the St. Johns River.  Saying that she never waste any time tying any type of special rig and rarely even takes time to bait the hooks.  Using an inexpensive Daiwa open-face reel

with a 7 foot medium to light rod, she ties five #4 size hooks directly to the reel’s fishing line about 10 inches apart.  This is similar to the rigs mentioned above with a float and sinkers but without bait.  Her intent is to simply snag hook the mullet.  Judy says the secret is to throw a hand full of laying mash out a comfortable distance.  She makes sure her float is setting in the middle of the dissolving mash and as the mullet frantically search for the source they inevitably will bump the line moving the float slightly and she sets the hook, snagging her catch.  She says this works well as long as the laying mash keeps going out to attract the mullet.

Judy also says the busiest time for mullet fishing is just before the mullet begin their immigration south in late August, when the mullet are full of roe.  She says at the “wall”, people as far away as Atlanta will come to Green Cove after these roe filled mullet. 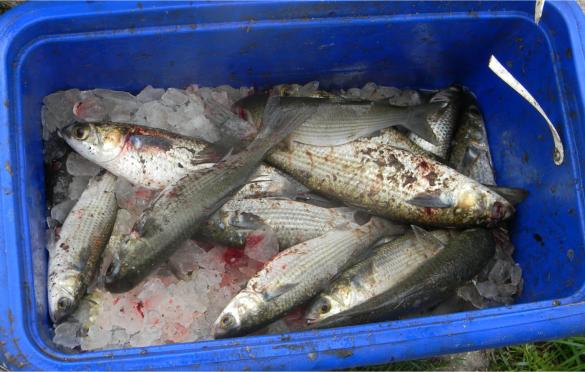 From Mullet Fishing go to the Home page
"Contact Us"