The Rubber Worm (also called the plastic worm) has been a main stay for bass anglers since its introduction in the 1950’s. The rubber worm is so effective almost any conventional shape will catch fish. Although mostly used to catch bass, the plastic worm can literally entice dozens of different species of fish to attack it.

Like other artificial lures, the plastic worm comes in many shapes and in many different colors. With this in mind, this page will discuss the three most important things to consider for a standard rubber worm rig which include the sinker, hook, and worm. 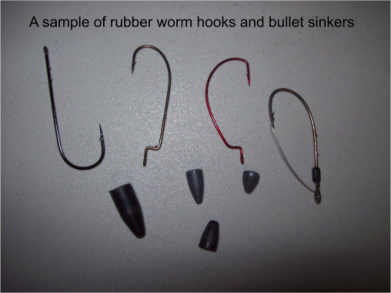 The sinker or weight can be optional, however, keep in mind the weight of the rubber worm may not be enough for efficient casting. If the worm is of sufficient size and the fishing intent is to allow the worm to float or to sink very slowly, leave the sinker off. In most cases however, a sinker is used. The bullet sinker

is the first choice of most anglers. The design of the bullet sinker means it is less likely to become snagged when fishing around structure. Also, its design allows the sinker to slide up and down the line easily which means a big bass may not feel the weight of the sinker until it is too late.

There are times, however, when the sinker may need to be pegged to keep it from sliding. For example, if an angler is trying to get a plastic worm down through a layer of surface floating vegetation, the bullet sinker may go down through the vegetation and slide on the fish line but not pull the worm down with it. Before the next try, simply slide the sinker down onto the eye of the hook and peg the sinker with a toothpick to prevent the sinker from moving. 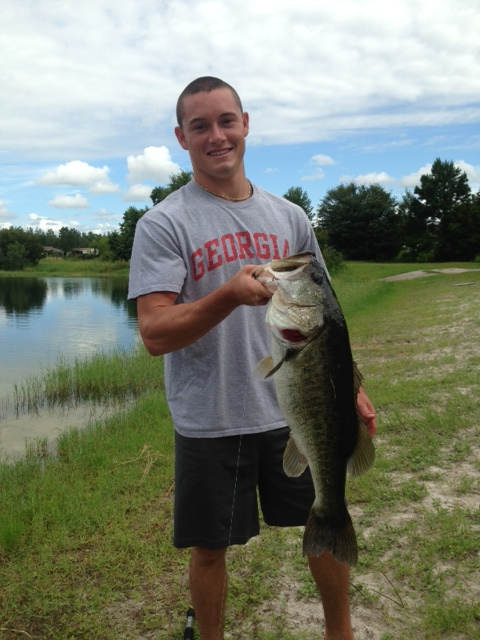 The most common weight sizes for bullet sinkers are between 1/16 of ounce to 3/4 of ounce. How fast and deep the angler wants the worm to sink will often determine how heavy the sinker should be. The main idea is to have the rubber worm look as natural as possible when moving in the water.

The next thing to consider is the hook. Any type of straight shank hook 3/0 or so can work, but hook manufactures have modified this hook style to increase the chances of a catch when using a rubber worm. Because the hook is run through the head of the worm and then turned so the barb is embedded into the worm’s body, modifications include angling the hook’s shank so the hook aligns with the worm better providing a more natural motion. Other modifications add shank barbs or keeper pens that prevent the worm from sliding down the hook shank after repeated casting, or the blending of lead weight onto the hook shank to improve vertical drop fishing. We suggest trying a few different styles of worm hooks

to get the feel for the one you like best.

Keep in mind, it is true that by embedding the hook barb into the body of the worm, the rig becomes somewhat snagless. It is also true that the hook is harder to set into the fish’s jaw, mainly because the hook tip and barb must travel through the worm’s body to reach the jaw. This means setting the hook hard. Keep the rod tip up almost vertical. When the fish picks up the worm, take out any slack in the line while dropping the rod tip to point at the fish and set the hook. 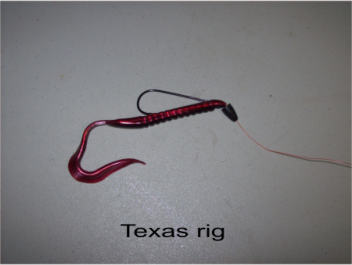 A heavy action 7 foot rod is often the choice of many anglers for this purpose because the longer heavy action of the rod provides more force through the line to the hook. Using 12 to 17 pound test line, many anglers when initially rigging the worm, will run the hook tip entirely through the worm’s body, then reset the hook tip back into the worm’s body so the tip is hidden. This often makes the hook setting action a little smoother. However, this may also cause the lure to snag a little easier because after repeated casting, the hook’s tip may penetrate just outside the worms body. Just keep an eye on the hook and reset it into the worm’s body when needed. 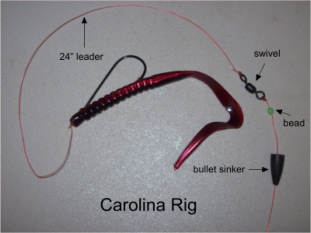 Another option for hooks is the weedless hook with its protective wire arms and barbed shank. Simply run the hook through the head of the rubber worm, leaving the hook tip on the exterior of the worm. Reset the protective wire arms to make the lure snagless, add a sinker if desired and go to fishing. This rig is more like a standard lure when it comes to setting the hook. This is a good set up for young anglers when learning to fish using a plastic worm.

will catch fish if presented correctly. The worm should feel life-like and have a natural motion when being fished. Sizes vary with the most common being between 6 to 7 ½ inches but range up to 10 inches. Color is important, generally dark colors such as black, purple, along with varieties browns, and reds, are effective. By adding in a metal flake, a balanced two tone, or infused scent the rubber worm can become more enticing. 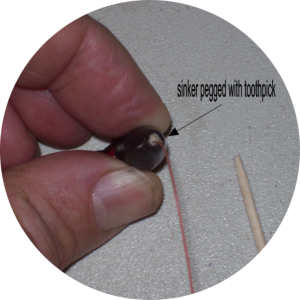 From Rubber Worm go to the Home page
"Contact Us"