Trotline fishing for catfish is a tradition in the South.  A weekend camping trip on the river or creek would not be complete without the excitement of slipping out on the water after dark to “run” a trotline and finding a catch of several catfish.  Catfish that by the end of the weekend will find their way into some hot grease.

Trotline fishing is relatively simple in theory.  A trotline is basically a length of line stretched with the use of a boat, across a section of water and fastened secure at both ends.  On this line every three or four feet a hook is dangled from a drop line, essentially making it impossible for a catfish to swim by the line without being tempted by one of the baited hooks.  Once “set out” the trotline is left unattended until a few hours later when the trotline is checked, fish removed, and rebaited.  Trotline fishing for catfish is most effective after dark because many species of fish which would rob the trotline hook’s of their bait during day light hours often hide at night while the catfish is a very efficient at feeding in the dark.  Darkest also, adds an element of anticipation to this type of fishing which is hard to explain.  Trotline fishing is a form of fishing which must be tried to appreciate.

are available, complete with all the essentials.  These are good if you want to try trotline fishing for the first time or have doubts about how to build a trotline.  These kits provide a good understanding on how to rig up and set out a trotline plus they are reasonably priced.  However, a trotline is relatively simple to build and somewhat fun.  Although all trotlines are fundamentally the same, there are some differences in styles.  These differences in styles often relates to how the drop lines, which hold the hooks, are attached to the main stretch line.  The drop lines, which are often smaller in diameter, must be attached so it can not slip or slide up and down the main stretch line.  Many trotline styles accomplish this by fastening the drop lines to the main line between synthetic clamps or hand tied simple knots.  This can become a little tedious and time consuming but is effective. 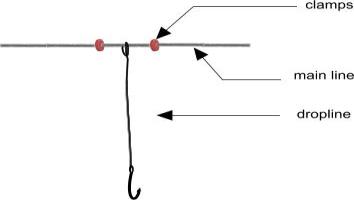 The style Fishing-Tips-Bait-Tackle.Com prefers was introduced to us by Jimmy, a Hardin County resident in Southeast Texas.  Jimmy, who enjoys setting his trotlines around the area where Village Creek joins the Neches River, shares our philosophy that a good fishing tackle tip should inspire angler to “do it themselves” while saving both time and money.  His method of making a trotline does just that by using only one size nylon braided line, sturdy snap swivels and quality hooks.  Utilizing line at least two hundred pound test, he makes forearm long loops along the length of the line using a simple knot.  All loops are spaced a full arm’s length wingspan apart with the first and last loop being about 10 feet from the ends. 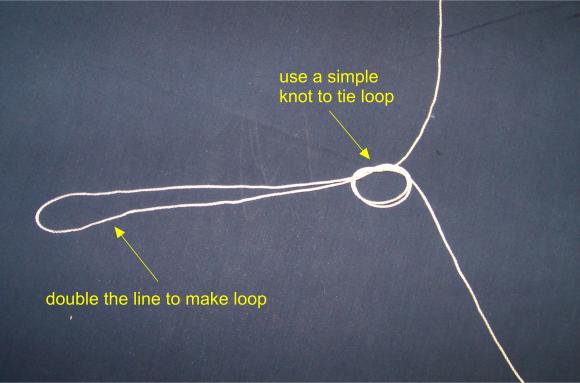 These loops are the drop lines, simply attach a snap swivel using a half hitch knot then add a hook to each swivel to complete the trotline.  The snap swivels are essential because catfish are notorious for twisting off a hook.  Hook size may vary depending on the targeted fish generally between a 2/0 and 6/0.  Also any drop line can be left hookless and used as a weight point to fish the trotline deeper. 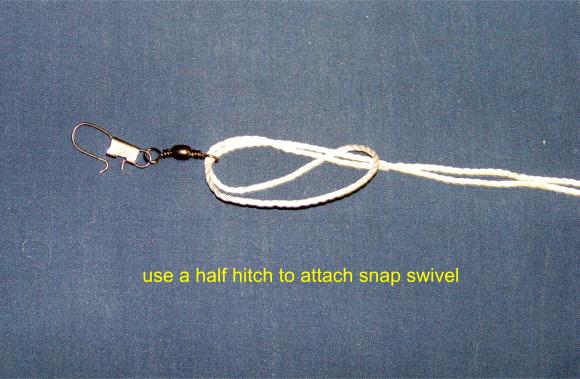 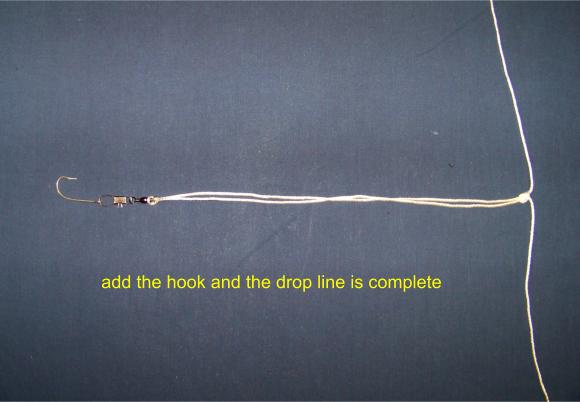 Jimmy showed us one more little trick with the trotline.  Instead of using a bulky racking box or wrapping the trotline around a coffee can he simply rolls the trotline up as if it was a ball of yarn.  This makes the trotline easy to handle and store.  Plus if you like, the hooks can be removed before making the ball. 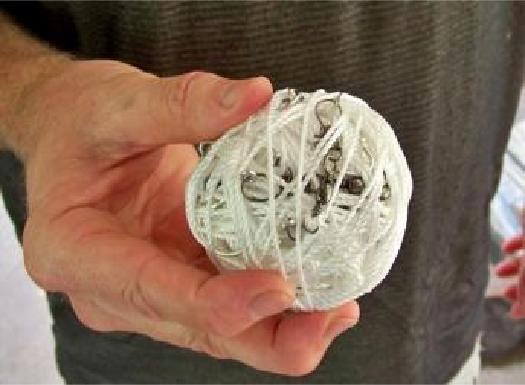 Although a trotline can be “set” in any place, some spots may prove more productive than others.  For example, a bend in a creek or river where the water is relatively deep, near an area where a slough or small tributary feeds a larger body of water, or if the trotline does not interfere with navigation spanning it across a waterway.

Choose two anchor points along the water to stretch the trotline, anchor the first end to a tree limb, tree root, cypress knee, or anything that will hold the line secure.  Tie the line low to or just under the water surface, that makes the trotline less noticeable to any by-passes.  Move the boat to the next anchor point, allow the trotline to lay loosely on the water and tie off the other end.  Now that the trotline has been “set out”, it can be weighed and baited.

The trotline can be weighted with a large lead sinker, a brick, an old window counter weight or anything else found around the house that is heavy enough yet small enough to manage.

Almost any thing can be used as bait for trotline fishing.  Live bait work particularly well; blacktail shiner, crawfish, small bream or even earth worms.  Cut bait, a portion of blue crab, chicken livers, or man made stink bait can also be effective.  For the best results bait the trotline just before dark and if possible use a variety of bait.  Allow the trotline to fish two or three hours before checking for a catch, likewise replace any lost bait.  The trotline can be checked several times through out the night or left until morning. 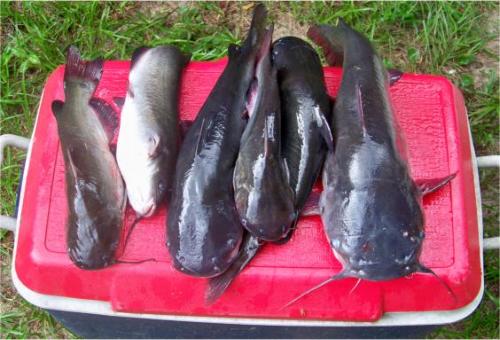 A few safety tips on fishing trotlines are in order.  When “setting out” the line, check for critters.  Before tying the line off, keep an eye out for a stray snake or a pesky wasp nest.

Although a trotline can be managed by one person we recommend that anglers don’t “go it alone”, especially after dark.  Keep a Knife

handy, a situation may arise in which a drop line (or even the main trotline) may need to be cut immediately.  If an angler is unfortunate enough to have a hook snag a hand this need becomes quite apparent.  Also, nothing can be more disappointing than losing a good size catfish before it can be gotten into the boat so take a dip net.

An alternative to the trotline is the limbline.  Using the same gear used to make a trotline, the limbline is tied up as if it could be fished from the end of a pole with a single hook, snap swivel, and sinker.  Hang the limbline from a flexible limb that extends over a preferred fishing hole.  Several limblines can sometimes be as effective as a trotline, however due to the distance between limblines generally more travel is required.

Most states have regulations on trotline fishing so be sure to familiarize yourself with the state rules.  These rule may require the line not to be over a particular length or may limit the number of hooks on a line.  Some states may prohibit setting a trotline across navigable waterways.  Also, some state may limit the time period a trotline can be “set”, or may require name tags.  Still, trotline fishing is highly recommended and can be very productive. For a survivalist point of view, check out this article on trotlines.

From Trotline Fishing go to the Home page
"Contact Us"